As the years go by, my life is engulfed more and more with animal rescue. Moving from one side of the country to the other, has allowed us to meet ALL TYPES of animal saviors. But we will never get enough of the sweet lives that are saved. Not to mention the amazing people behind the transformations. As many of you know, we recently moved back to Florida and our “cat world” has exploded! And I’ve been blessed to get to know an amazing group of my (now) closest friends. Most importantly, they are ALL utterly heroic in their own animal rescuer right. So here, I wanted to share the blossoming story of two unlikely friends, owned by one of those gals. What these two seem to recognize in each other’s hearts, is nothing short of a supernatural bond. 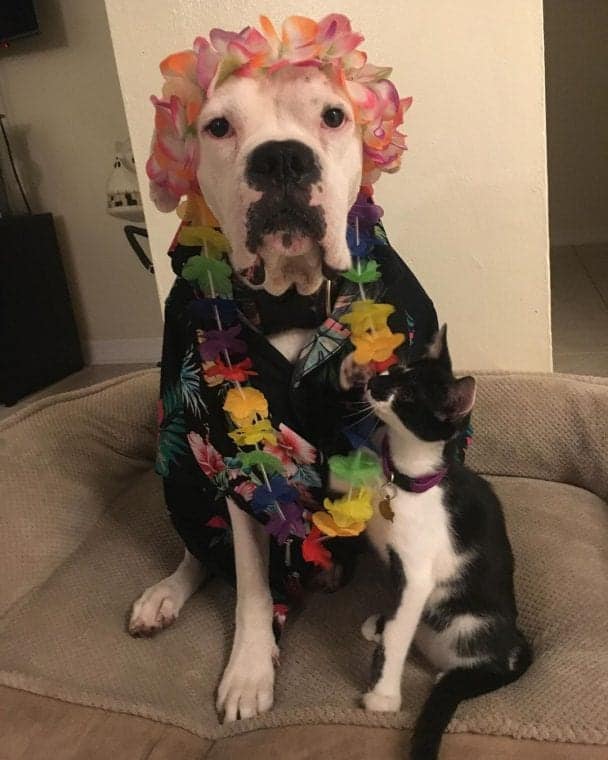 I happily introduce to you the heartwarming duo themselves, Brutakiss and Dean.
The super humans behind my newest dog-and-cat obsession are Nicky Botelho and Michael Freitas. Nicky spends her time as an animal fosterer, shelter volunteer, make-up artist and stunning painter! Check out her work below and be excited, because she uses funds for her rescue work. 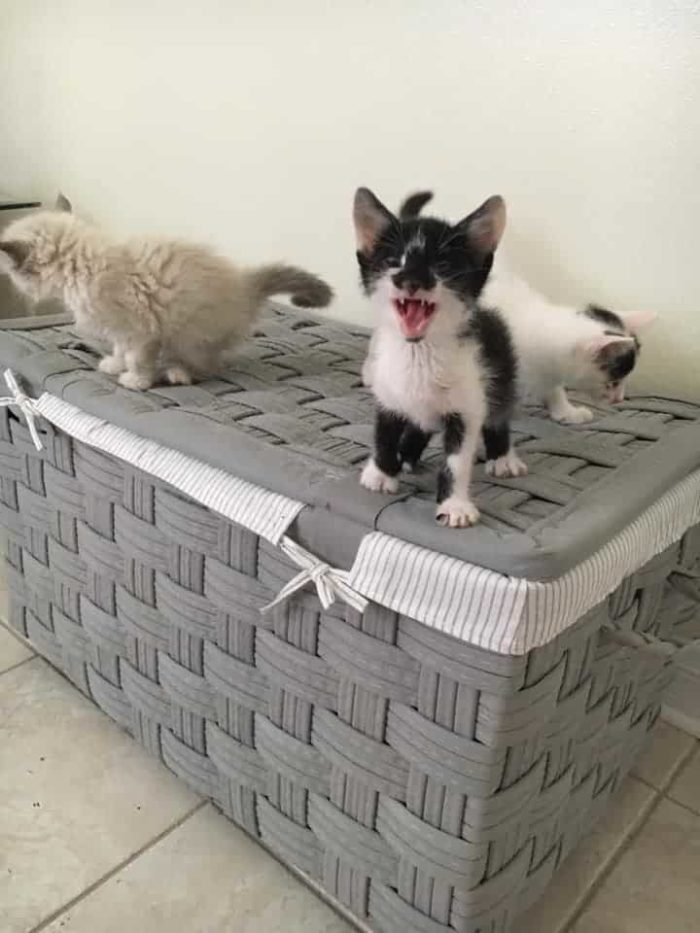 When Brutakiss came along in early 2016, he was happy to help his new family with their important efforts. You see, Bruty as he’s affectionately known, did not have a great start in life. As a 2 1/2 year old Boxer pup, his life had only known much sadness. Horrifyingly, Nicky learned of his plight from an ad on Craigslist.

We got him from a family where he was being neglected and possibly abused. He’s in rough shape but he’ll be good as new in no time. We are already spoiling him and he knows it! 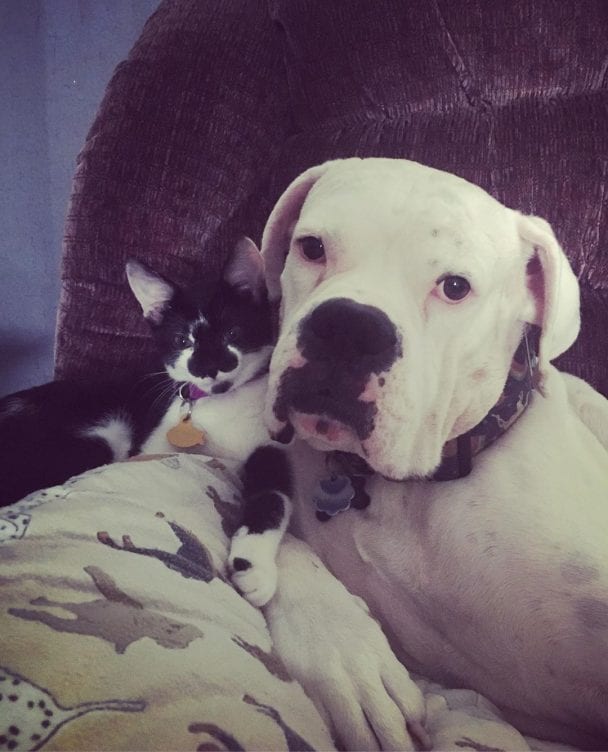 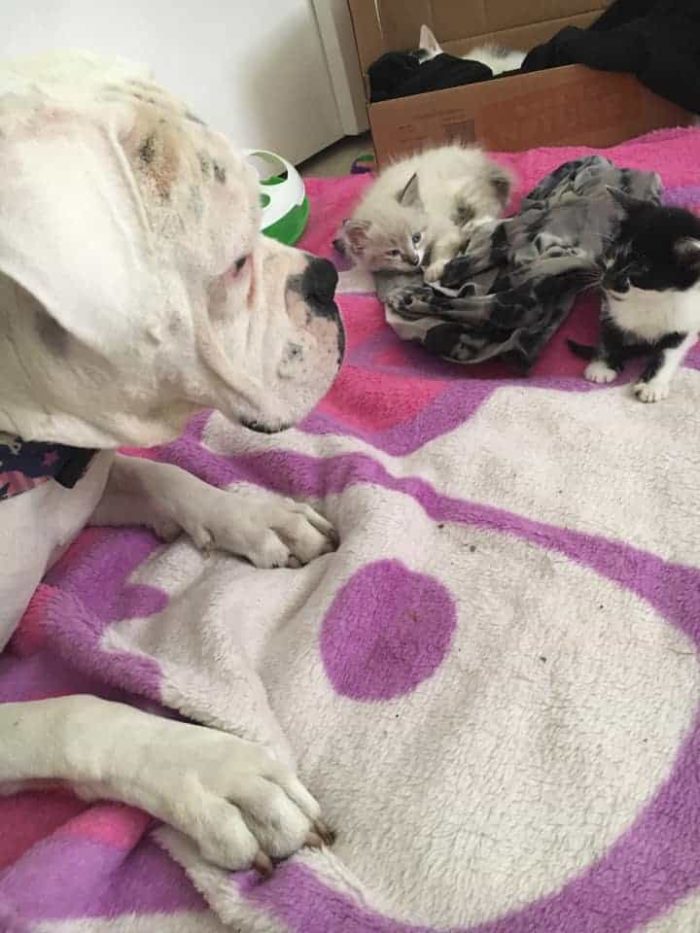 With the love that he finally received–in spades!–Bruty was more than willing to do his part to help. Before long, an adorable, patient, trusting and spectacular fashion model emerged from within.

Brutakiss can clearly and successfully portray a range of emotional characters. 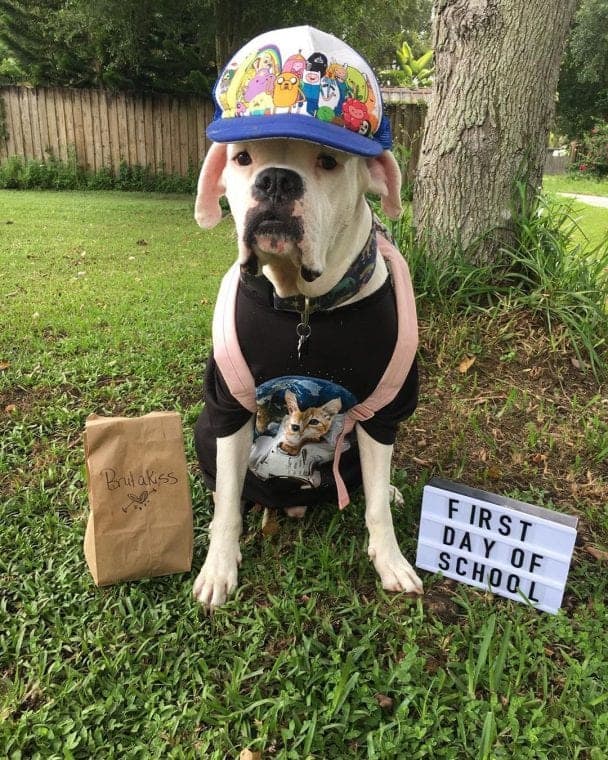 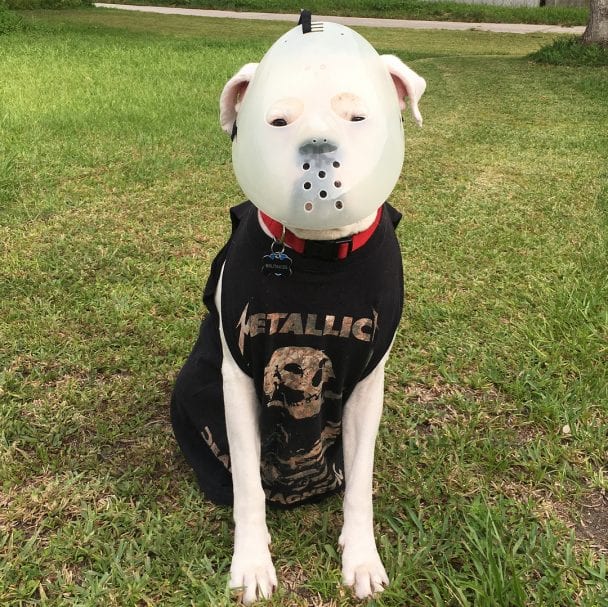 And seriously. His wardrobe leaves nothing to be desired! Do you understand now what I mean with my obsession with his little face?! 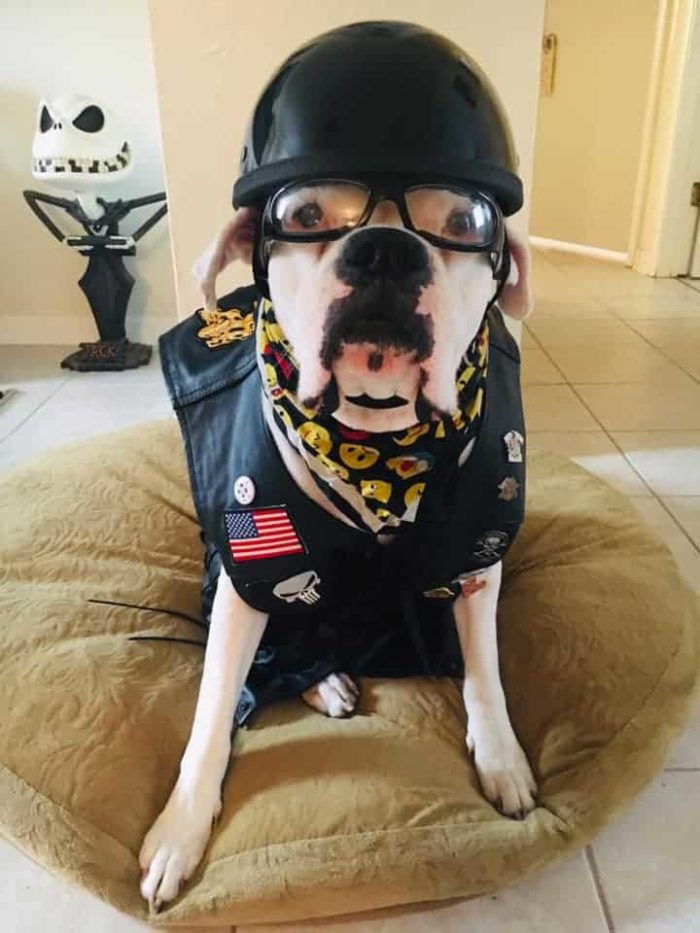 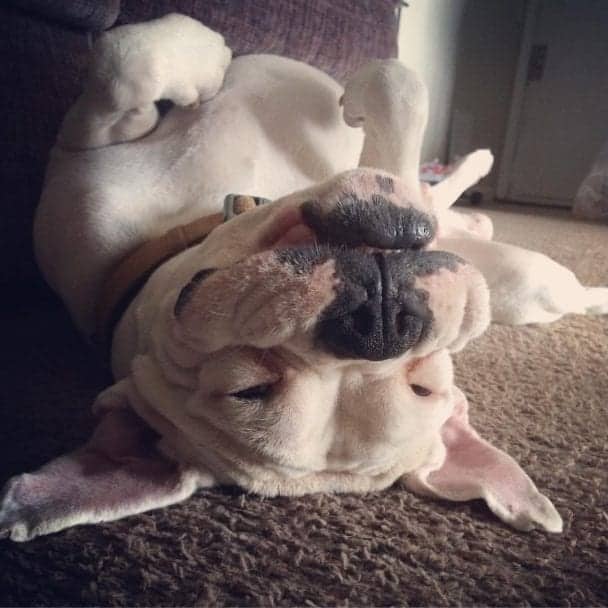 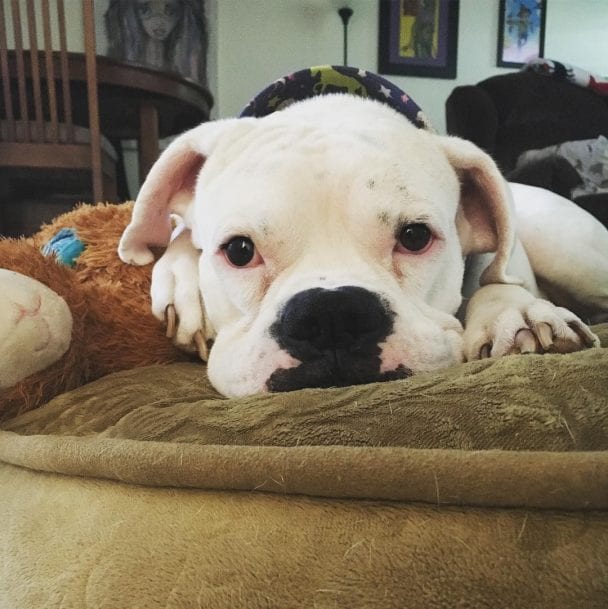 However, Brutakiss was hiding a secret that again, seemed almost supernatural in nature.
The boxer absolutely loved helping his new mom and dad with rotating door of foster dogs! He is absolutely a friend to all.

But then a trio of young furbabies were in need of Nicky and Michael’s help. So at the end of May 2019, Kneady Kitty Rescue gratefully turned 3 male kittens over to their care. 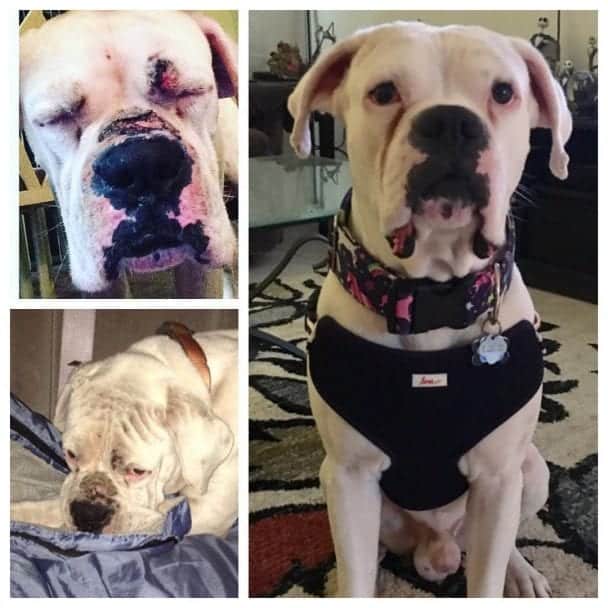 It was Bruty’s first time meeting new kittens. But with his calm demeanor, they weren’t worried in the slightest. The IMMEDIATE bond that formed between Bruty and the kittens was shocking. And from the moment the three kittens entered his life, he has not stopped caring for them for a second. 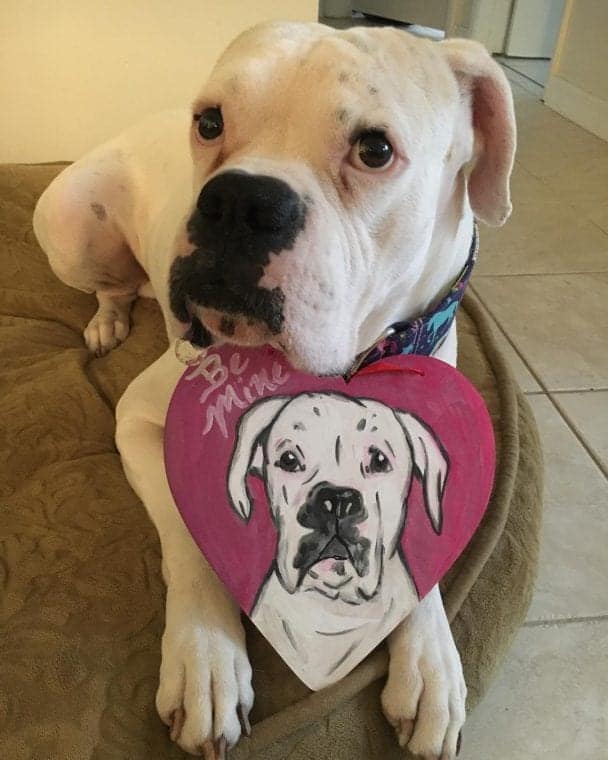 Last night we got in some very sick kitties. But after coming home from the vet their foster mom, Nicky Botelho, got them all settled in. Then her boxer, Bruty, could tell they weren’t feeling well and decided to keep watch over them. He’s been laying outside the door when she’s not home. 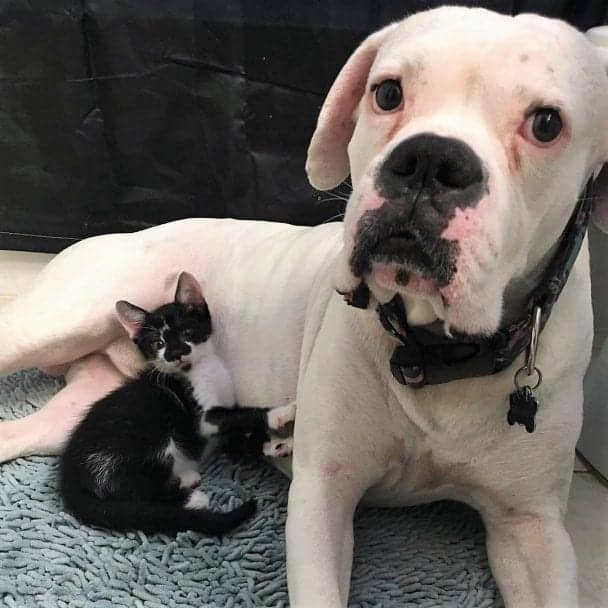 Seeing the surprising bond forming almost instantly, Nicky knew the purrfect mystical names for the new kittens. It didn’t hurt that it is one of her favorite shows–and mine as well…

With that, the kittens were named after characters from the CW series Supernatural; Sam, Dean and Castiel.
As Supernatural became the longest-running American live-action fantasy TV series back in 2011 and has reigned superior ever since, season 15 debuting in October, will be the final season. It was with this in mind, that I love these kittens can now carry on the name sake…little wayward sons. <3 Image: @nicky_the_pirateunicorn Each day, that magical bond between Brutakiss and the kittens grew. But as you guessed it, one of the brothers decided Bruty was HIS best buddy. Dean gravitated towards the massive pup that loomed over him–and settled right in. Photo:@themisadventuresofbrutyanddean Dean’s recovery from being abandoned wasn’t a “relaxing Sunday drive” either. His health fluctuated as with many rescue kittens that young. But he pulled through with a fighting spirit, just as his namesake’s character certainly portrays. Photo:@themisadventuresofbrutyanddean They could be found snuggling all over the house, always near each other. And by July 10th, Sam and Castiel were ready for their “big boy” surgeries and ready for adoption. I guess it’s not official till it’s Facebook official! The boys have been adopted!!!!! Castiel and Sammie will be going to a home together!!!! I’m not going to lie. I’m really going to miss them. But they couldn’t be going to a better home! ♥️#adoptdontshop #fosteringsaveslives Image: @nicky_the_pirateunicorn I’m also so proud of Brutakiss for stepping up and being the most amazing foster brother. Considering everything he’s been through in the past! I already knew how great he was but now I have no words! We can’t wait to foster future kittens that need help! Image: @nicky_the_pirateunicorn Most that know Nicky, expected what was going to happen to Dean though. Yup, foster fail/success! Photo:@themisadventuresofbrutyanddean Image:@themisadventuresofbrutyanddean Photo:@themisadventuresofbrutyanddean Nicky and Michael knew there was no way they could separate Brutakiss and Dean. So Dean officially joined the family and Nicky officially made them their own social media pages. Photo:@themisadventuresofbrutyanddean Now, we can all follow them on Instagram @TheMisadventuresOfBrutyAndDean. And here we see them preparing for Hurricane Dorian to make landfall on the East Coast. Clearly, they’re stressing. Even better than that? You can follow Nicky @Nicky_the_PirateUnicorn for more pics of the two AND the foster fundraising they all do. Here’s her painting of No Eye Banjo, who is Dani the Cat Lady’s glorious feline. In face, Dani’s actually the person who introduced me to Nicky. Told you I’m lucky to be around stunningly strong women. The bonus is their equally lovable animals! Image: @nicky_the_pirateunicorn And I can’t wait to get commissions of our Furtastic Four from her. I already have by Brutakiss sticker and an ornament on hold. <3 To sum it up, thanks for all you and your loving family do! 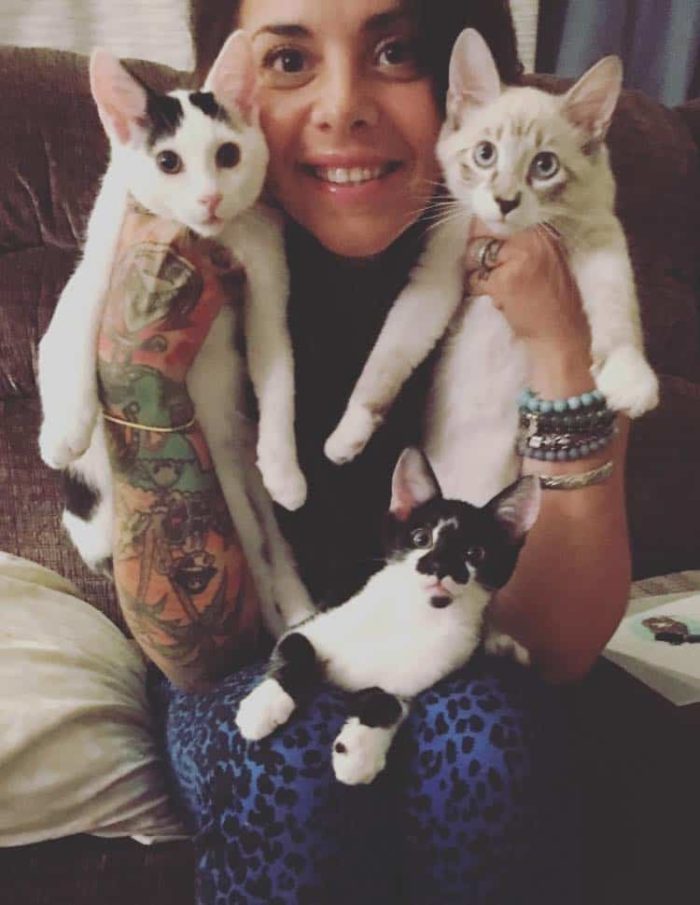 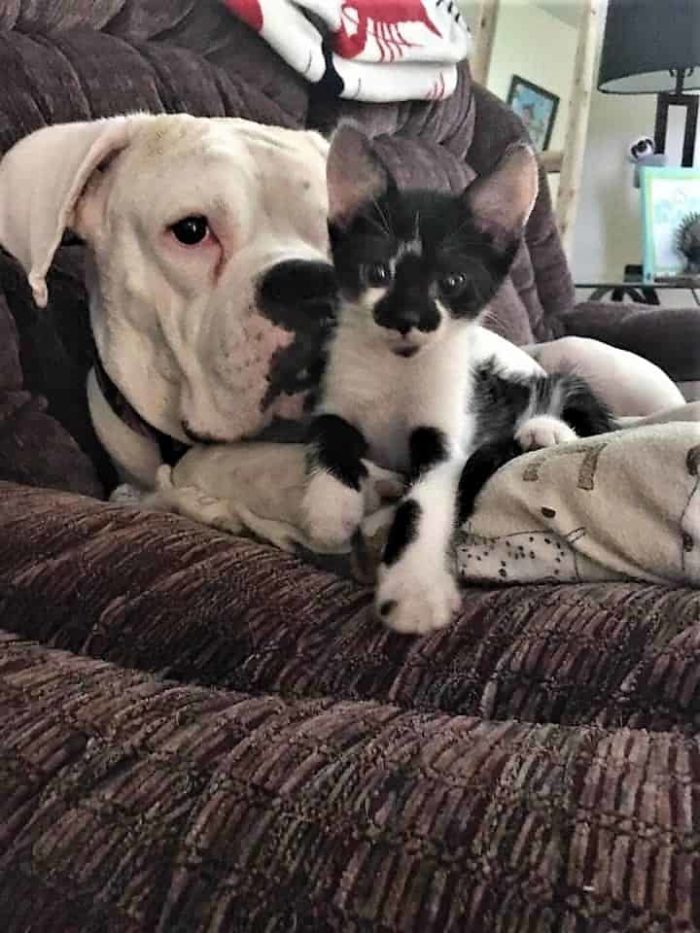